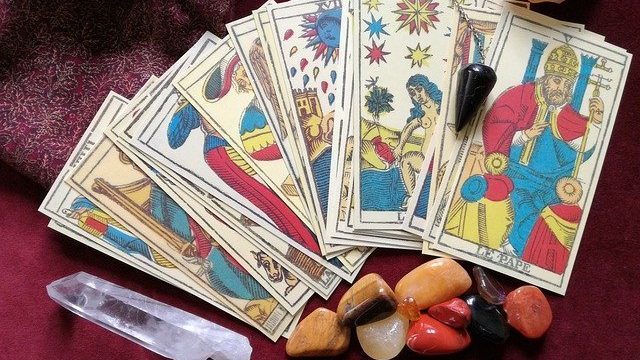 The first stage of this tarot spread involves cutting the deck into four piles as shown below. These four piles represent the four elements and the four Qabalistic Worlds, Atziluth, Briah, Yetsirah and Assiah. Apart from the use of Elemental Dignities, Counting and Pairing techniques which I discuss as we develop OOTK, there is the use of astrology. As an indication of the cosmological range inherent within the first stage of OOTK, here is a quote from Dion Fortune:

Astrology is so elusive because the uninitiated astrologer works on one plane only; but the initiated astrologer, with the Tree as his ground-plan, interprets on the four planes of the Four Worlds, and the effect of, shall we say, Saturn, is very different in Atziluth, where it is the Divine Mother, Binah, to what it is in Assiah.

But we are getting ahead of ourself. Without the basics we are lost.

First Operation: Representing the Opening of the Question

Stage 1 of The Opening of the Key is normally enough for most purposes, and it seems that even within the Golden Dawn, this was as far as most went. In the diagram below, the cutting of the cards is viewed from the Tarot Reader. If you are instructing the Client to cut the cards, s/he will be cutting to the right.

For some reason, clients seem to lose all sense of which is left or right, so I will always point to where I want the cards to be placed. Even so, they will often try to cut the wrong pile in the wrong order, and place it in the wrong place! For the elementary aware reader, any deviation from standard practice will give clues as to elemental imbalances within the client. The original Golden Dawn instructions were for Adepts who knew and understood the significance of the reading, and they would cut the cards precisely in half. The general public is entirely ignorant of this stricture, so the size of the piles will vary greatly – again the astute reader can take advantage of this. For example, if the Water pile (C) is very small, it is possible that the client generally finds love lacking, either through accident or design. Those who worry will often make Air (C) excessively large.

Start with the deck to your right.

Cut the cards approximately in half to the left.

Cut the right hand pile in half and place in the middle.

Cut the left hand pile in half and place it to the left.

Turn the four piles over

These four piles represent the Four Princesses through to the Four Aces, and each is associated with an element:

These four cards can be read as an overview of the situation or matter under question. The rules of Elemental Dignities can be used here to determine relative strengths and weaknesses of the piles.

The next stage is to read the pile containing the Significator. In this example, the Fire pile has been spread out in a horseshoe. Read from the Significator using the Counting technique and Elemental Dignities. Note should also be made of the predominance or lack of a particular element, and also 3 or 4 of a sort, such as 3 Aces, etc.