Transference – where psychic powers come from

The phenomena of transference is where the emotions and energies of a client are projected onto the therapist. Nobody knows how it works, but it does. Transference is how psychics and clairvoyants see things. But they think it is through the medium of tarot cards or crystal ball, or other device. The predominant mindset in tarot is by looking at the images of the individual tarot cards, memorizing the meanings and using positional spreads as the Celtic Cross spread, but many find that they can never remember the meanings, so they think they are doing something wrong which affects the confidence. However, transference works easily, and you might be more psychic than you think if you allowed your awareness to feel the transference from the client.

Unlike the tarot world which lives within its own bubble, great advances were made in the 20th century on psychology. Sigmund Freud discovered the unconscious, and transference but because the tarot community believes the basis of the tarot is with the Tree of Life, they cut themselves off from real progress. For example, there are theories that clairvoyant powers somehow manifest from Kether or the Supernal Triangle on the Tree of Life, despite the fact only the most persistent of magicians make any progress climbing the tree!

Transference happens spontaneously and unknowingly – it is not something that you understand as it happens. It is only later when you become aware that transference has happened that any kind of comprehension dawns. It is a two-way street – some therapists call it counter-transference, where the therapist projects onto the client. A simple example is when the client falls in love with the tarot reader, or vice versa – a real minefield.

Transference is going on all around us, from friends, family, lovers, enemies, work colleagues. It comes from international corporations, advertising, politicians, the media.  The reason is that although these groups are faceless, they are all run by people who are also experiencing transference. It is a nightmare. Events in the world such as war, or natural disasters like earthquakes and tsunamis send out transference, and it is the mechanism for black magic, conscious or unconscious, from amateurs or professionals.

Some people are very sensitive to transference, to the point that they experience the projected thoughts and feelings as their own, making life a roller-coaster, particularly if they are unaware of what is going. Whether you feel you have no awareness or experience of projection and transference, or you find yourself overwhelmed by energies, there is a simple technique: just ask the question: “Who does this belong to?”, you will feel lighter at this point, then return to sender – don’t ask for a name, let nature do the job for you.

Secondary Emotions in a Tarot Reading

Secondary emotions are often experienced by Tarot readers – how to deal with them in a sympathetic manner. 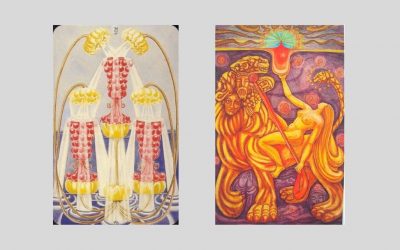 Avoiding good luck at the start of a tarot reading Signs of avoiding good luck, or self-sabotage, are found before the tarot cards are laid out and interpreted. In these two real life examples, dropped cards and the client changing the layout of the cards before the...