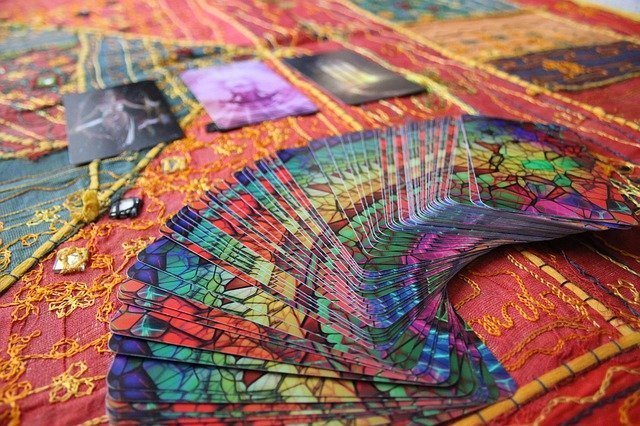 Abbey Theatre Reading using the Opening of the Key Spread

The counting technique creates a story when reading Tarot in a sequence using the Opening of the Key Spread. This video describes the method.

The method is to look at the tarot in groups of three, starting with the Queen of Swords. Annie Horniman used the Golden Dawn counting technique to decide the order of the triplets for W.B. Yeats in the Abbey Theatre reading. The problem with Horniman’s method is that we do not know which Tarot deck she was using, which makes it difficult to know which direction the Court faces. The Rider-Waite deck had not been invented, and the Golden Dawn members were encouraged to draw their own Tarot deck within the rules given. Mary Greer notes that Horniman probably used an Italian design.

During a reading, the cards are spread out in a horse shoe, with the top card (Ten of Wands in this case) on the right. There are obvious problems with this on a website, so I have had to do a vertical tabulation. The numbers show the counting order, so we start at one for the Significator, the Queen of Swords, counting four positions to the King of Wands, and so on.

You may find it easier to lay out the tarot in a semi-circle starting with the Fool on the left to follow the Card Counting sequence. The commentary for each card is an interpretation that includes the elemental influence of the adjacent cards plus the elemental basis, which is the Air place. Armed with this, we immediately know that an Air card will be excessive, while an Earth card will be very weak.

4: All will change for the better & quarrels will pass away

All three cards are Airy in an Air position. Again, we note the Air pile is ruled by the 10 of Wands, Oppression. Something is being swept under the carpet by the use of inspirational and somewhat angry words. These cards are decidedly ambiguous and contradictory. We could interpret these cards to mean the birth of an idea that is already contentious and not what it seems.

3: That will restore peace & be well for a youngish man.

Well, there may be an uneasy peace, but we have to ask ourselves why the hostilities have not been mentioned yet! The GD attributions for the Prince of Cups is not at all complimentary, so we would have to conclude that this ‘youngish man’ is pulling the wool over the eyes of someone, and he is in the ascendant. Excess Air, without any moderating influences from Earth and Fire.

7: I am in a good current to make a [legal?] decision concerning a fair young man

(Greer) As Mary Greer notes, Annie Horniman did not complete the counting cycle, so we will continue our analysis to see what could have been omitted. Perhaps even her blind optimism could not be maintained, which is not surprising, since we have  Justice surrounded by Prince of Cups and King of Wands. There is a certain male ascendancy. Maybe Greer comes up with her interpretation working from hindsight. Using Elemental Dignities, the Prince is passive, while the King is active. One could see Justice as trying to create a balance, or even ‘dividing and ruling’ two men. Either way, the action is taking place with men, not Horniman.

2: Which will carry me on if I decide with a certain amount of self-assertion

These three cards are indeed active and harmonious, but they are all much more assertive than the Queen of Swords place, so it is more likely that the King of Wands will prevail. Remember that the Air pile is dominated by Oppression, 10 of Wands. Absence of Earth and Water show that we are dealing with ideas that lack any kind of compassion or empathy.

Horniman interpreted the presence of Three of Cups to be ‘happy and friendly’. Here, the card is more or less ignored as the fire cards dominate. It should also be noted that the King of Wands is not good at maintaining his efforts. Annie Horniman does not say who should be assertive, but it is quite possible that here we have good advice in the face of a difficult situation. Note that Horniman chooses to interpret these triads in the first person, as if it appertains to her, but the presence of Court cards indicates otherwise.

1: I am in a happy successful current.

Delusion does indeed run deep. When using Elemental Dignities, one has to take into account the influence of the top cards of the Piles, and we already know that Water is badly aspected. There are only three Water cards, and the Significator is surrounded by two of them. A better interpretation might be ‘I am determined to be happy and successful’. The lack of Earth and Fire indicates an absence of activity and practicality. Possibly Horniman was looking at the Chariot card as having greater significance because it is the Centre Card.

8: A fair young woman is moving away from prudence and toward a business transaction (Greer)

We agree with Greer’s interpretation. As we well know, the Earth element is very weak, so we could use the ill-dignified interpretation from Book T: ‘Superficial, theatrical, cruel, unstable, domineering’. In other words, a youngish woman lacking business sense. Note also that we have gone from a powerful Air position to a weakened Fire surrounded by weak Earth. If we take the opposite view, that Fire dominates Earth since it is so weak, we have a youngish woman taking advantage of a business situation, but this venture is decidedly rocky.

5: Some gift will cause quarrels & anger

While the 4 Pentacles indicates a gift, Horniman ignores the alternative meanings of ‘Gain of money or influence’. The situation looks more and more like a power struggle. The ‘quarrels & anger’ is correct. Note that Earth is decidedly weak, and there is not the moderating influence of Water. We are already in the Air position, which tends to add contention to any situation.